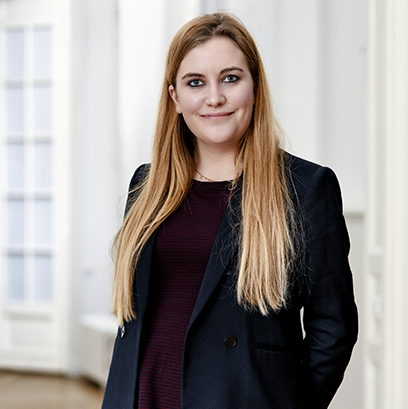 She acts both as counsel and in litigation.

Lawyer since 2017, Marie-Sixtine du Rusquec practised public business law in a firm specializing in public law, as well as in an Anglo-Saxon firm, before joining Atmos in 2022

Marie-Sixtine du Rusquec has a background in public law and is mainly involved in public business law.

She defends the interests of her clients in litigation in the field of public economic law, particularly in the area of public contracts.

In this respect, she has advised numerous public authorities and companies in connection with the award and performance of public contracts and matters of public property, urban planning, and construction.

Marie-Sixtine du Rusquec deals with a wide variety of cases, as do the firm's clients, including companies and various economic actors, local authorities, individuals and associations, both as counsel and in litigation.

Her missions cover the whole of the contentious and pre-litigious treatment of the cases delegated to her, namely the development of litigation strategies, research for amicable solutions, referral to the jurisdictions, drafting of the writings and the representation in front of the jurisdictions and judicial expertise.

Information about cookies
We use technical cookies to ensure the proper functioning of the site, we also use cookies subject to your consent to collect statistics visit.
Click below on & laquo; ACCEPT & raquo; to accept the deposit of all cookies or on & laquo; CONFIGURE & raquo; to choose which cookies require your consent will be registered (statistical cookies), before continuing your visit to the site. More details

The Internet Explorer browser you are currently using does not display this website correctly.

We recommend that you download and use a more recent and secure browser such as Google Chrome , Microsoft Edge , Mozilla Firefox , or Safari (for Mac) for example.
OK